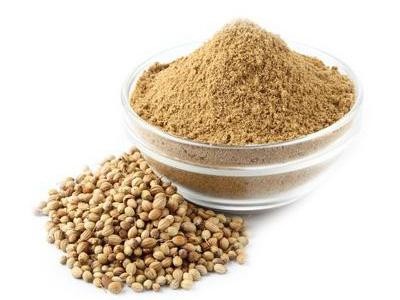 Coriander is a spice with many healing properties. Its seeds are small, round with a brown color. The seeds, leaves and even the roots of coriander are edible and have very special flavors and uses. Coriander contains rich amounts of vitamins A, C and K, folic acid, iron, calcium, magnesium and potassium, as well as small amounts of niacin, vitamin B and zinc.

It is an herbaceous aromatic plant whose leaves and fruits are used in cooking, medicine and confectionery.

It is of the same family as parsley and looks like parsley, with some even calling it (Chinese parsley) while its taste is reminiscent of celery. It is an herb whose parts are useful from the root and the leaves to the dried fruits.

The word coriander in food preparation can refer exclusively to seeds (as a spice), rather than to the plant. The seeds, when crushed, have a lemony citrus flavor due to the terpenes, linalool and pinene. It has been described as hot, spicy and orange-flavored.

The nutritional profile of coriander is different from fresh shoots and leaves. The leaves are particularly rich in vitamin A, vitamin C and vitamin K, with a moderate content of dietary minerals.

Although seeds are generally lower in vitamins, they provide significant amounts of dietary fiber, calcium, selenium, iron, magnesium and manganese.

- Coriander is considered to balance blood sugar levels in the blood, as well as to help fight stress, migraines, fatigue and anorexia.

-It is also considered to be a stimulant and has a positive effect on the nervous system.

-Coriander has the ability to neutralize germs such as salmonella which is the cause of food poisoning.

-Properties of coriander, is its ability to reduce the cramps of the period.

-Strengthens the immune system and thanks to its high iron content helps fight anemia.

-Treats problems with your respiratory system.

-Drink a tea with a handful of coriander leaves per cup of water. This will help eliminate mucus from the lungs, larynx and even the nose.

- Coriander can be used to treat diarrhea when it is due to fungi or germs.

-Reduces the levels of bad cholesterol in the blood and helps eliminate the accumulated fat from the inner walls of the veins and arteries, preventing heart attacks.

-Fights anemia, because it has a high content of iron. It is ideal for people who are iron deficient. The best way to consume it is raw in salads, in tea, chopped as an additive in soups, creams or sauces.

-It can also be used to treat minor eye injuries. Make a tea with a handful of coriander leaves and a cup of boiling water. Once cool, soak a little cotton in the liquid and rub it over your eye.

-Coriander helps improve the health and function of the liver, pancreas, lungs, stomach and endocrine glands.

- Coriander helps, among other things, in the fight against stress.

-Helps women who have trouble producing breast milk after giving birth (for example those who have had a caesarean section) should try to drink coriander tea.

-It is good for relieving the symptoms of liver failure, for cleansing the body of bacteria and removing LDL, the bad cholesterol from the blood.

-Soothe stomach pain by making a decoction of coriander. The tea made with coriander seeds, helps digestion when drunk after eating. Simply boil a teaspoon of coriander in a cup of water for ten minutes and strain it. Drink a cup after each meal.

-It can also relieve intestinal colic. antiseptic, detoxifying and analgesic.

-Every time you suffer from bloating and belching, put half a teaspoon in a cup of hot water. coriander seeds, leave for 10 minutes to act and drink it. You will soon get rid of the discomfort because this particular herb is known for its digestive and antispasmodic properties.

-Its external use also seems to reduce muscle aches and joint pains in case of rheumatism and arthritis. * It is diuretic, antifungal, fat dissolving, invigorating,

The leaves and seeds of coriander are very popular especially in Asian and Mexican cuisine, as they are widely used in salads, soups, marinades, but also in fish or meat specialties, as it perfectly highlights their taste.

Its aroma, reminiscent of lemon, is perfectly combined with cumin but also with garlic and ginger, while it goes well with foods such as artichokes and mushrooms.